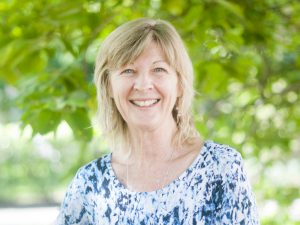 Valerie DeWitt began her career as an executive in the fashion business and in the early 1980s became a student of yoga. After having children, she left her 20 year career in that industry, and in 1998 began to train to teach yoga.  As an RYT (200 hour) since 2001 she specializes in both Iyengar and Insight Yoga, which incorporates mindfulness with yoga practice. A year later she became a Certified YogaKids® Teacher and brought her yoga programs into the schools. Valerie has served as a mentor to trainees with YogaKids®, and facilitated workshops and trainings for teachers, parents, and childcare professionals at several local public and private schools and community organizations. She continues to teach children in private schools setting and adults in schools and at the Yoga Institute of Miami.

Valerie has completed the Mindfulness-Based Stress Reduction (MBSR) Program and the Mindful Teachers Training Program (MTTP) under Valerie York-Zimmerman in 2011.  Valerie then assisted and co-led in 8 MTTP trainings and since 2015 has led MTTP courses for MKM.  In March 2015 she completed the Mindfulness Based Stress Reduction 6-day teacher training intensive from the University of California San Diego’s Mindfulness-Based Professional Training Institute.  Recently she has participated in an MBSR Program and MBSR Teacher Tutorial with Zayda Vallejo.  Valerie began teaching mindfulness for kids at The Kampong in MKM’s after-school program in 2012 and continues to lead children’s programs for MKM. She is passionate about bringing mindfulness practices, yoga and meditation to children and adults in our community.